well, we are here ! It is around 5am now, small airport, we are at Katowice, at the airport, waiting for our bags to arrive. Everyone are so tired after a long night without any sleep, but the journey begins now. I better go look for Abigail in the crowd. 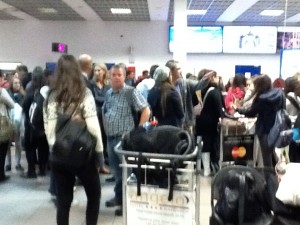 6am, finally we are out of the airport, on the bus, on our way to Krakow for breakfast and beginning of our trip. We start the journey with a briefing by the security officer we have with us, then an hour drive to get some rest and sleep before we wake up again.

We met our guide Adi and our security man Shay, from now on this is the routine on this journey, being an Israeli group in a Foregin country requires to have security, requires people to be careful and keep an open eye.
This is our guide Adi: 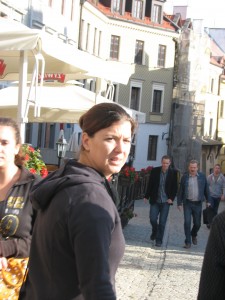 We started our trip with a song: all the faces, all the names, all of them, all the songs they took with them …

All the people we lost during the holocaust, these are who we are going to remember

We are driving on the country roads, it’s all green and pastoral, but you can’t help it, you find yourself thinking how many Jews were murdered in these woods, this is a beautiful country, but it is the cemetery of the Jewish people.

Krakow was the Capitol of Poland, this is where all the kings and rulers of Poland are buried. We are now stopping for breakfast at the university of Krakow, next to the stadium of Krakovia, where the famous football team is playing 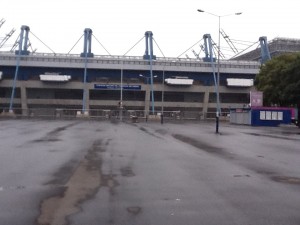 We are having Breakfast at the university, eating and making sandwiches for lunch as well. We have lots of places to cover, so we will not have too much time for lunch, meaning we will have to eat what we carry with us as we go. On top of that the parents sent lots of candies and the school made arrangements to have fruits on the busses, so we will not be hungry. 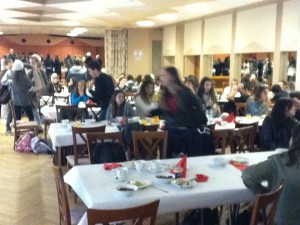 Jewish quarter in Krakow, the Kazimish quarter in the past:
Krakow wasn’t destroyed at the second world war. More than 90% of it survived, mainly cause Hans Frank, the German governor of the “general governament” as it was called then, chose it to be the center of his ruling. Krakow of today is built from lots of red bricks, these bricks remind the survivors from Poland the hard labor they had to do during the war, they worked in camps making these bricks. 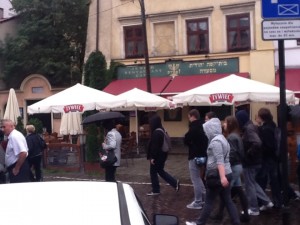 Lots of Hebrew writing as we walk through the Jewish quarter 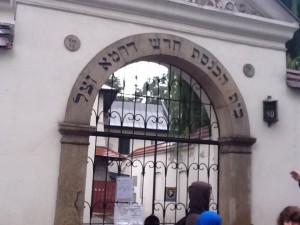 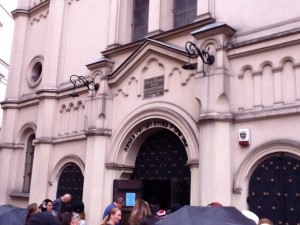 Inside the synagogue in Krakow: 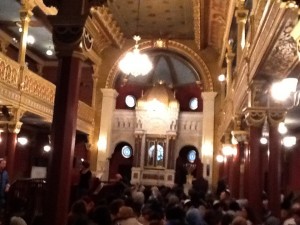 Here we had an opening ceremony for al 7 busses together. There are around 280 of us in total. it is overwhelming to be in what used to be the biggest Jewish quarter, the Kazimish quarter, the heart of Jewish life in Krakow.

School principal welcomes all students in the synagouge, followed by Noam, the guide of bus 1, who is talking about the Jewish life in Krakow now and before the war, past and present together, pluralism and Judaism. This is a temple, mostly belongs to the reform part in judaism, it’s meaningful because at the time of the war this group in Judaism wasn’t accepted, mid 19 century, most Jews were orthodox. 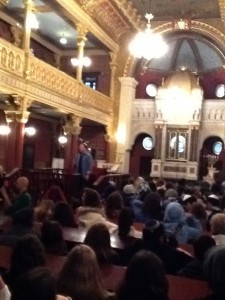 The community here was very liberal, not reform, but more liberal than regular orthodox, mixutre of opinions and ways, pluralism at it’s best.

This building was destroyed during the war, it was renovated in late 80’s with donations, it’s not active today, Jewish community is only 200 people at the moment, they are usually closed and only open when Israeli journeys like us arrive here, continuing the past.

King Kazimish in the mid 15th century brought progress to Poland, he changed it from wood buildings to stone buildings, Jews got here in the 10th century from Germany and France, Ashkenazi Jews, this king gives the Jews this quarter, he had a Jewish mistress, maybe that is the reason he loved the Jews and brouhgt them to Krakow, they in return called the quarter after him. He is buried at the Vavel, where the great people of the polish nation are buried.

This was the Jewish market at that time: 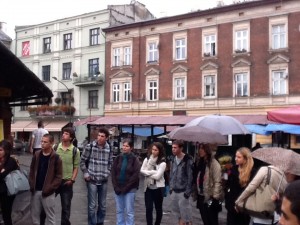 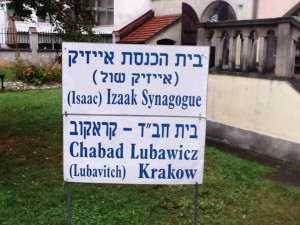 This Synaguge is named after Issac the jew. There is a famous Jewish story of a Jew called Issac. He lived here in Krakow and he was very poor. One night he hears a voice calling his name, it’s not his wife, and this happens to him every night. One night he hears that the voice tells him to wake up and go to Prague, he wants to go and against his wife’s opinion he goes to Prague singing all the way:

He gets to Prague and goes to the bridge that he saw in his dream. There he looks for the treasure that he saw in his dream. He looks for it under the bridge as the dream shows him, he even tells that to the guard at the bridge. The guard laughs at him and tells him: if I was following my dreams, I would go to Krakow to the house of Issac and find the treasure that is hidden there. Issac then goes back home, and under the table in his kitchen he finds the treasure as the guard told him and he then sings again the same melody. He is using the money to build this Synaguge, and it’s named after him. Today this is a museum. That melody he played is called a “Jewish Nigun”

This was a school and Synaguge of the Jews from the chezc republic: 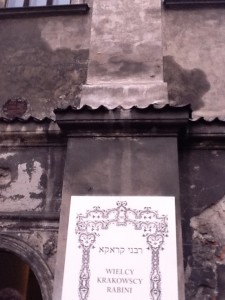 Jews were studying Torah here all the time, we can see the sign here from these days: 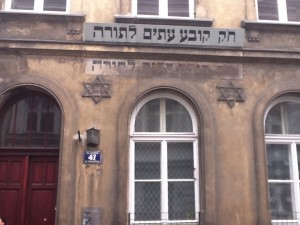 The Alte schoul, the old Synaguge, the first here in the quarter. 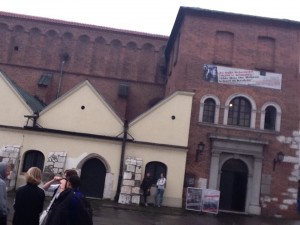 Before the war this quarter was very busy with religious Jews but there were also Zionist Jews here, non religious, big Jewish community. This is now the museum for judaica, inside you have more than 80,000 articles, stolen by polish people during the war, some of them we managed to get back to the museum. There wee More than 67,000 Jews here before the Jews had to leave the quarter to go to the Ghetto.

This is Part of the art and judaica that was returned to the museum: 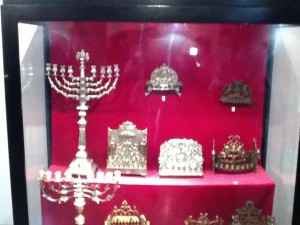 Short movie about the Graves at the Jewish Cemetery

Center of Jewish quarter , many Jews are here, famous rabbis who died here. One of them is the famous Rabbi Moshe Isterlisch, who wrote a very famous book talking about all the Jewish laws and the daily way of Jewish life. 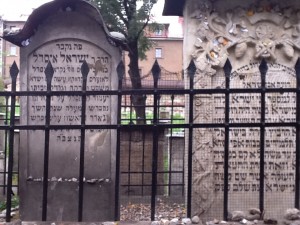 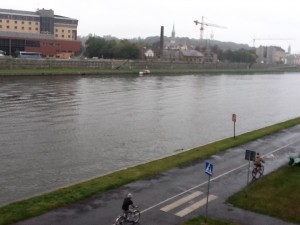 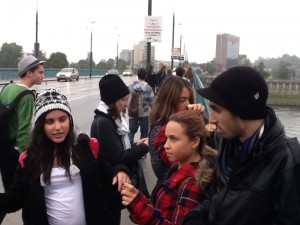 All the ghetto had 320 buildings, it was closed at 1941 with less than 400 meters, more than 20,000 people on an area where only 2500 people lived before the war. Crowded, hungry, suffering, that’s how the Jews lived here during the war, but at the same time, Jews were trying to have some sort of normal life to, to keep the education, the cultural life etc. June 1942 was the first selection (Accia the Germans called them) where Jews were sent to their death in the east. From here Jews were sent to work at the factory of Oscar Shindler or sent to their death in the camps.

The chairs we see here at this square is where German officers sat down to select the jews to be sent out of Krakow and from this square thousands of jews were sent out to death. 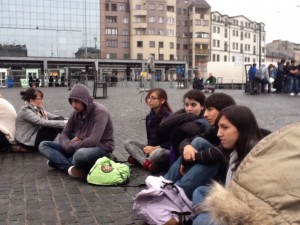 View to the zagouda square from the pharmacy across the street, where a polish pharmacist named Tadeush helped Jews and got the title righteous gentile thanks to what he did: 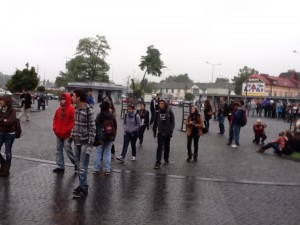 Part of the original walls of the Ghetto 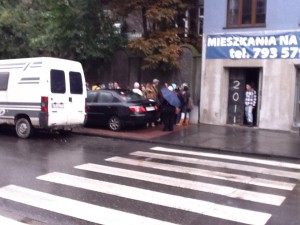 After the last 6000 Jews were taken from the Ghetto and killed, the Germans destroyed the place and it became a regular part of town. Jews revolted against the Germans in Krakow and this was an inspiration for the others in Warsha to also fight against the Germans, but not much is known about the revolt in Krakow.

Oscar Shindler and the camp in Plashow: 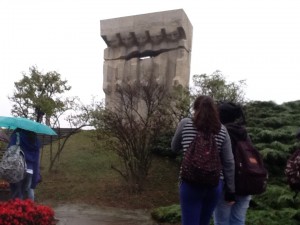 We are standing on top of the hill, the entire valley had 2 jewish cemeteries, street is still called Jewish street and the Jewish community all was here before the war. The Germans build their working camp of Plashow on the cemetery and covered the streets of the camp with tomb stones. Germans sold Jewish workers to Oscar Shindler and others and they became forced workers, working for the natzis. The house of Amon Gat, the commander of the camp, is not on top of the hill like in the movie “Schiendler’s List” but below the hill. He shoots Jews from the balcony there, as we see in the movie. The house is at the corner of the white buildings below. More than 8,000 Jews were murdered in the camp here. 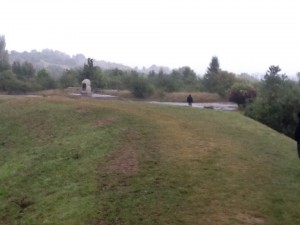 The bodies were burnt at the valley below. The monument was build after the war, they didn’t want to mention only the Jews so it is very general and talks about all the victims of the war, Jews and non Jews. The small monument talks about the Jews. Hungarian women were also sent here instead of to Birkenau at June 1944 and the smaller monument is to remember them.

The entire valley here is where 8,000 people were burnt after they were murdered. Before the end of the war the Germans destroyed the camp and got rid of the evidence, but this is the camp that the movie of Schiendler talks about.

We finish with a song:

Castle in Vavel, where the kings lived: 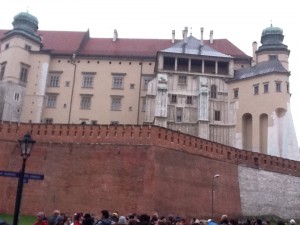 Up to the top of the hill, overlooking the entire city of Krakow: 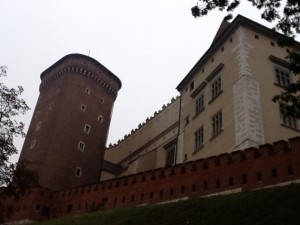 View from the Vavel into the Whisla river: 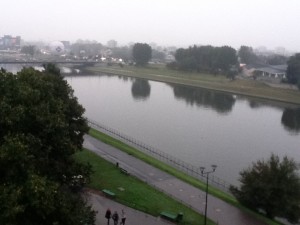 The symbol of Krakow is a dragon and every few minutes he fires fire from his mouth. The story says that the king of Krakow, king Krak, lived in This Castle. Of course he wanted someone to come and kill the dragon, so he promised his daughter to the man who will kill the dragon. After many try without any luck, a simple guy tried and manages to do it, he manages to blow the dragon up and the dragon sinks in the river below the castle. The location of this astle here is for control, the king needed to control the entire city from here.

Who is buried here? Leaders of the nation, not politicians, but writers, philosophers etc 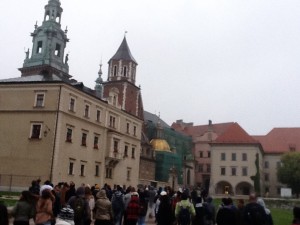 Short movie about the Inside of the Castel

If I want to summarize this day, I can try and say that today we learned about the very rich life in Poland of before the war, not only economicaly but mainly spiritualy, about the elite of the Jewish people and about a world which have disappeared in flames and smoke – the sites where it all happened are there, they look very green and pastoral, yet these are the graves of a whole nation.

Tomorrow we will visit Auschwitz and Birkenau where millions of people died. What bothered most of the kids is the difference between the beautiful landscape and what happened here, they can’t believe that people today live their life where millions were killed just few years ago, it will be a deeper feeling as we get closer to the main camp.