Today is the Shabbat, so we will have a walking tour of the city center in order not to use the busses as much as we can. We walk through the city into the city center, the old part of Warshaw.

We are inside the Ghetto, looking at the wall of the Ghetto. This is the last house that was left from the original Ghetto: 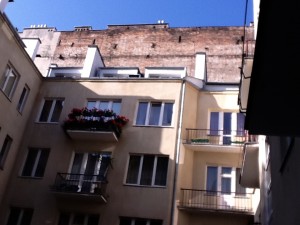 3 weeks after the beginning of the war, Poland is no longer independent, it is taken by the Germans and will stay under Foregin control till the 90’s. Polish army had no chance fighting against the Germans, they tried to fight tanks and army with horses. The first Ghetto is build, Ghett Petrokov (Rabbi Israel Lao, who used to be the chief Rabbi of Israel, came from that Ghetto). Before the war there were around 350,000 Jews in Warshaw, most of them left Warsaw, rest are sent into the Ghetto, the wall is built and all these Jews are forced to live very crowded inside the walls.

Watch the movie “the pianist”, about life in the Ghetto in Warshaw. This will give you an idea of how life use to be inside the Ghetto, how the Jews lived in Warshaw before the war and how life changed for them, it will make you understand the tragedy.

The Ghetto is closed at 1940, it has 174 streets in it, but is keeps around 450,000 Jews now, with refugees from all over the area. The entire Ghetto is only 2.4% of the entire city, but the Jews here are 30% of the total population – very crowded, with no green areas at all at the Ghetto. Streets in the Ghetto are very small, very crowded, one-way only, hunger, crime, dirty, poverty, those are the conditions in the Ghetto.

Just to give the idea of hunger, people lived in the Ghetto on 187 calories per day, normal people need between 2000 to 3000 calories per day, specially if they are active or if it is cold. There was food that could be bought, but there was no money. There was a very developed black market for goods and food, but people couldn’t afford it. With all the difficulties around people tried their best to keep normal life, they had weddings, they loved, they red books and kept cultural life, they tried to stay human beings. There was a children hospital there, where Janush Kortzak worked, built from donations of Jews from the community. After he finished there, Janush went to open homes for orphan children. This hospital had a research on hunger, which was accepted as an academic research and is still used until today. Unfortunately the reason why this was such a reliable and accurate research was that they used real people who were starving from hunger, who can think that the results of this research are not true given the place and time it was taken?

July 1942 Jews from here are deported to the camps in the east. Germans always used Judaism to fight against Judaism, so they used meaningful Jewish dates to start deportation, this deportation took place on the 9th of the Hebrew month of AV, the day of the destruction of the temple and a very sad day in Jewish history.

Part of the wall that went around the Ghetto survived: 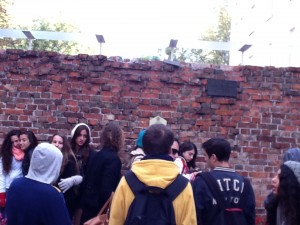 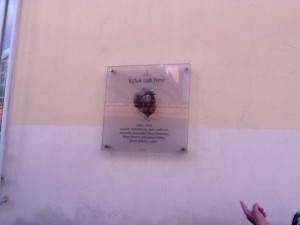 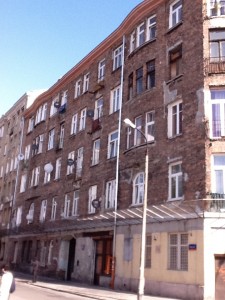 This is the hospital from the inside. This is the closest you can get to imagine life inside the Ghetto, this house looks the same as it did before, including the original wall which is part of the entrance gate 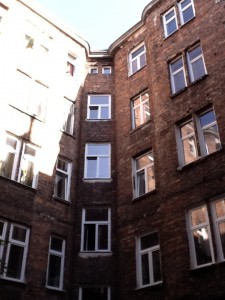 This was part of the original gate, we can see here the original brick wall ant the base of the gate in these days. We have a photo with a body of a dead person in the street of the Ghetto, you see this gate base clearly in that photo. 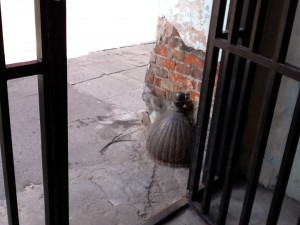 Another original part of these streets: 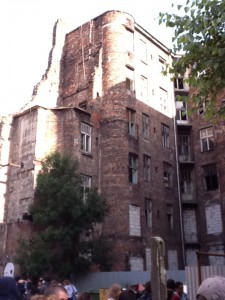 This is another house from the period of the Ghetto 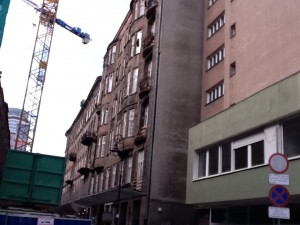 Same house from the other side: 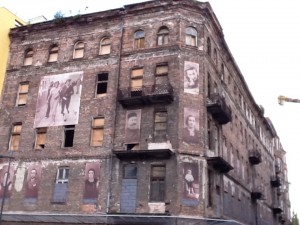 We are in the square where the Jewish synagogue is, the Nozuk. This is part of what used to be the “small Ghetoo” in Warshaw. Today this is the center of Jewish life in Poland, including Israelis who are part of the diplomatic corps. In Warshaw now there are around 400 Jews. Lots of the Jewish restoration is thanks to Ron Lauder. He started sponsoring Jewish life here, rebuilding buildings and that even brings polish people to discover their Judaism and convert back to Judaism. Many of these people were taken from their parents and put with polish families, they grew up as non-Jews and now they come back to their original religion.

Church of the convertors in the midst of the small Ghetto. Some Jews changed their religion, but these new Christians were still considered Jews by the new anti semitism, since for Natzism this was a matter of race and not of religion: 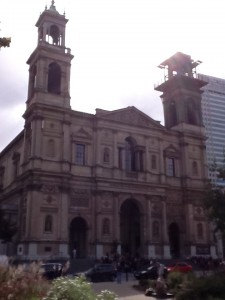 The statue of the previous pope John paul the 2nd. You can see him everywhere in Poland: 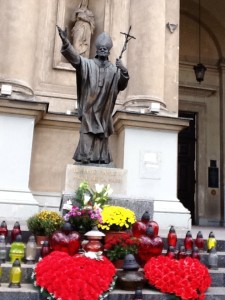 Synagogue in the Ghetto, the Nozuk synagogue. There were 5 big synagogues and many more smaller synagogues. This is the only one that survived the holocaust: 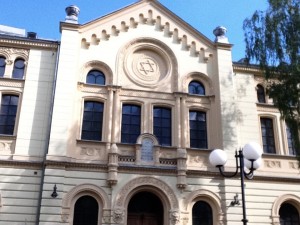 Synagogue is build by Pinchas Nozuk, a reach man who had no children and donated at 1902 money to build this. It was active till the beginning of the war. Building was renovated at 2008 by the Warshaw municipal government office and the Jewish community. During the war the synagogue was robbed and the Natzis used the building, this is why it survived the war. The yard here was where Jews would be gathered to be taken to work around.

Today all these buildings are sponsored by Ron Lauder, son of Estee Lauder who was born in Warshaw. There is a kindergarden here, and Jewish life in the community.

Tomb of the unknown soldier in Warshaw, behind the fountain: 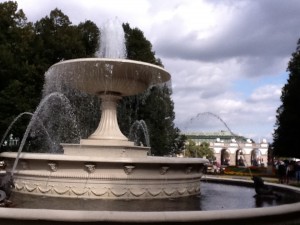 This is from the front, they also have here memorial for Jewish fighters from the Ghetto: 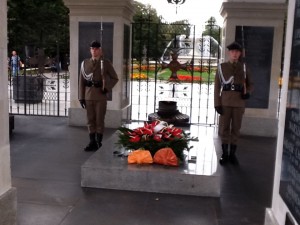 Free time at the city square:

Monument in memory of the polish revolt in Warshaw 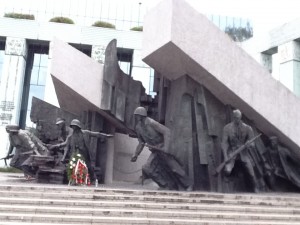 During the communist control over Poland they were not suppose to remind this revolt. We are not talking about the revolt at the Ghetto in Warshaw, started on the eve of Passover 1943, but on a later revolt where polish revolted against the Germans. During the Warshaw revolt in 1943, Jews from the Ghetto were fighting together with the polish underground outside. The polish didn’t fully cooperate with the Jews, they helped them but they didn’t take an active part in it. In August 1944 after the end of the revolt in the Ghetto, Russians get closer to Poland, polish think this is the time to fight against the Germans together with the Russians, but the Russian army doesn’t enter Poland and doesn’t help them. They prefer to let the Germans kill the polish, more than 200,000 people from the total population of Warshaw, then they take over and the polish realize they are now under Russian control. They are not allowed to build monuments and until 1990 there is only a small monument not far from here and that’s all. This new monument was built in mid 90’s in memory of the revolt of the polish people, not the Jews.

In the evening, we listen to the story of Joseph Pink. He is a polish farmer who saved the life of a Jewish family during the war and for that received the title of a Rightouse among the nationas and a certificate from Yad Vashem. He and his children are not alive, but his grandchild came to the ceremony and honored us all with her story. The Pink family saved few Jews, among them the grandmother of a girl from the trip, so it was emotional to see how that girls gets to meet people from the family who saved her grandmother, realizing that if not for them, she herself wouldn’t be alive today. What else do we need to understand that all living Jews today are in some way Holocaust survivors?

After dinner, we enjoyed a polish folklore show before we sat down to talk about the experiences we had today. Here are some photos from that show: 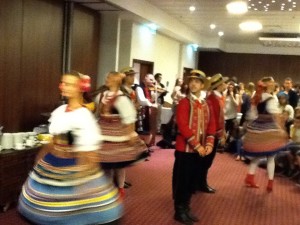 Short movie from the folklore music dance and show: