Morning of the last day in our journey

We start the morning with a meeting in a polish school, where the kids will have a friendly basketball game. This is a tradition of the school, each time they come to Poland, and they already have long terms relations with this school. For me it was good to see that we don’t only teach the kids what the polish people did during the war but also teach them that there is a new generation and there is hope and that they can connect with this new generation from a whole different point now, as young strong independent Israelis.

The two groups are on the field already, getting ready to the game. 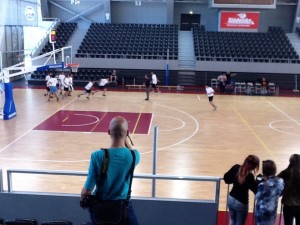 In the second quarter of the game: 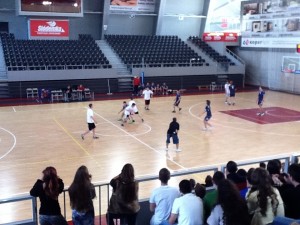 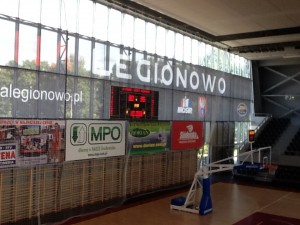 Okopova, the Jewish cemetery in Warshaw: 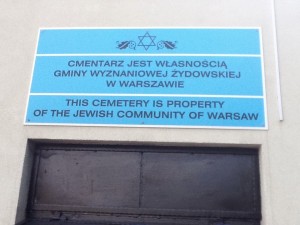 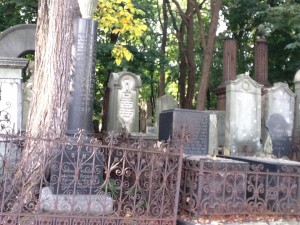 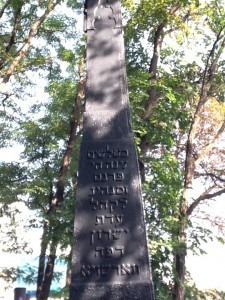 Old graves with more modern graves, simple people but also rich people and of course Rabbis, you can see here the faces of the Jewish society in Poland: 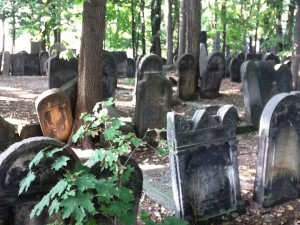 This grave is the burial place of a very famous rabbi, rabbi Shlomo Zalman, he is buried in a separate building so when people come to visit his tomb, they will be able to meet and pray on his grave 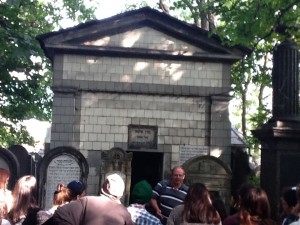 All Jews who are buried here will be put with their feet towards the exit from the cemetery, do when resurrection day arrives, they will be able to get out of the cemetery. When you have the Jewish date on the grave, you turn it into numbers by Gimatria (numerical value of letters) then add 1240 to get the regular gregorian calendar.

Professor Balaban who is buried here researched all Jewish communities in Europe including the Caraim, who believe only in the written Torah. Hitler wanted to use his research to decide if they are Jewish or not so he can include them with all Jews. Balaban told the Germans that Caraim are not Jews in order to save them, but Germans didn’t accept that and they killed them together with the Jews. 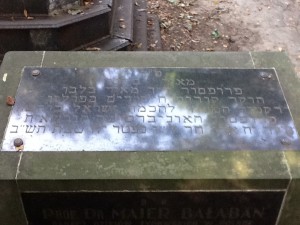 To summarize the visit to the cemetery, the fact that the new part of it is so small shows that no jews were left in the city, not enough people to die here cause the community is so small

In the green area behind this stone, there is a mass grave for the victims of the Ghetto in Warshaw. 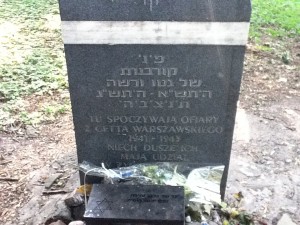 During the time the Ghetto was active, there were lots of dead people in the streets, too many to be buried in individual graves, not to mention that sometimes they had problems to identify people, so they were all put into 5 mass graves. First, they would take the dead and hand them to someone to bury them, then they would just put the body dressed in the street at night, then they would even take their cloths to use and put their naked bodies in the streets. Lots of bodies would be collected from the streets and taken to mass graves, they died of hunger or Tiphus. Polish couple designed this monument and the black line on the stones in third hight, symbol for third of the Jewish people who were killed during the holocaust, 6 millions out of total of 18 millions Jews in the world on the eve of second world war. We estimate more than 100,000 people in all these mass graves here in Warshaw.

Tomb of Doctor Zamenhouf who invented the Esperanto. He was born in Bialistock and wanted to make people speak the same language, so he invented Esperanto for everyone to speak. Here is the sign of that language: 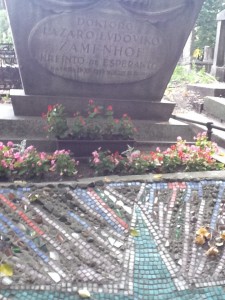 Tomb of someone from the Bund organization, these who wanted to be Jews in Poland and speak Yiddish instead of going to Palestine like the zionists wanted. One of these was Mark Idelman, who is buried here: 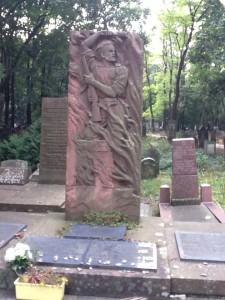 Tomb of the father of Janush Kortzack, Josef Goldzmit. He was mentally ill at the end of his life and his son never married since he was afraid that this will pass on in the family. 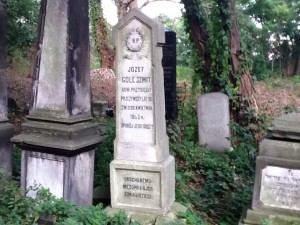 In the next grave, this is the Tomb of the famous writers Y. L. Peretz, Anski and Rinzaan, all from around 1920 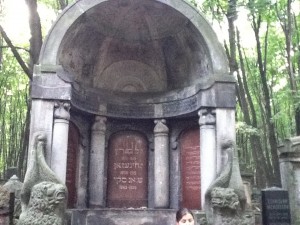 The Heroism Path to the Rapaport Monument

One of the kids in the group shared here the story of his grandmother: her father was picked up in the street to be sent to death, but he paid a German soldier and gave him a gold watch and he was saved. She herself was saved by a German soldier only because of a mistake in identification: another Jewish family paid him to save their girl, he made a mistake and saved the grandmother instead. When he brought her back to them, they all realize the mistake he made, her father then found her and they managed to survive the war. She spent the rest of the time till the end of the war with a polish woman who kept her alive, but she always knew that her life was saved because of the mistake of that German, and that another child was killed instead of her. 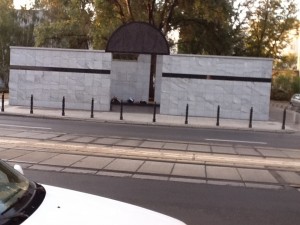 We are looking into the “umschlagplaz”: 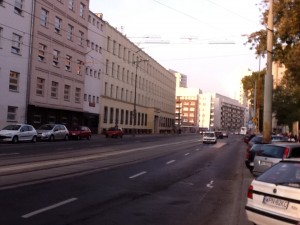 The Path of Heroism is built from 16 stones who mark heroes of the holocaust, writers, poets, fighters, they all did their part to contribute and they are remembered along this path. 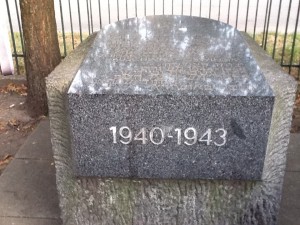 We walk along these 16 stations, 16 stones with different stories. 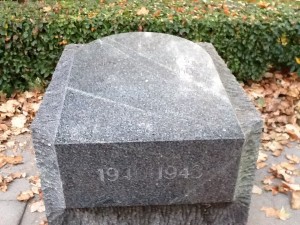 The path ends at the Rapaport monument, remembering the victims who died in the revolt of the Ghetto in Warshaw: 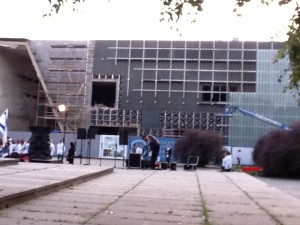 In front of it they are now building the new Jewish museum: 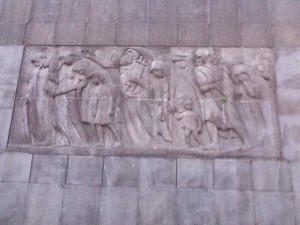 We will have here the closing ceremony of the entire journey: 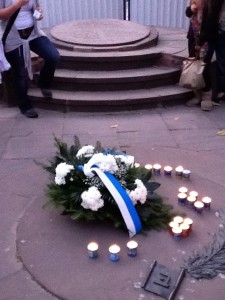 Before the big ceremony we had a small circle of everyone together with a song:

In front of the monument: 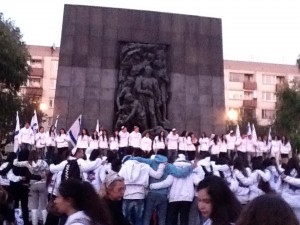 This is the final ceremony at the end of the last day, Abigail is going to sing few songs here. She opens the ceremony, sings in the middle of it and closes it with the national anthem of Israel:

Group photo of all the kids during the ceremony below the monument: 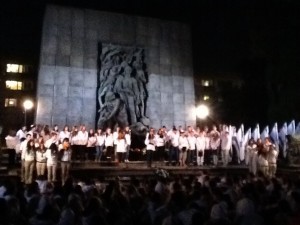 Tonight was the final meeting of the entire group. We sat in a circle, trying to see what did each one of us get from this journey. This is a very individual experience, some have it strongly and some don’t, but everyone leaves something behind in the soil of Poland and takes something back with him to Israel. What is that thing?

We heard lots of things that the kids went through. They gained knowledge of course, understanding of what happened, felt sadness and sorrow for the victims, shared life story of people and families, as well as of their class mates, but they each experienced in in a different way. One of the most deep sentences I heard in this journey was in Majdanek, the guide told the kids: “some of the Jews who died here spend here less time than the time we spent touring here” – this was so true, one minute they were there, people with families, dreams, hopes, life and the next moment they were gone, just like that, as if there were never there, it made me think of how fragile life is, how important it is to appreciate what you have in life and how lucky we are to be in our own strong independent country, with an army to protect us, with life and hopes for the future, which wasn’t the part of these who were murdered.

HaTikvah, the song closing the ceremony: